The Liberal Democrats support the spread of congestion charging across the country.

The Lib Dem Transport spokesman hailed Ken Livingstone’s congestion charge. ‘The Government must provide leadership so that other local authorities considering introducing a similar system can proceed with the backing of the Government’ (Tom Brake, Press Association, 24 February 2003). 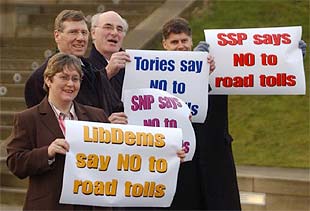